Two shows we love, combined into one: The Extraordinary Lives of Ordinary People meets Clues.  First, B-Side’s Tamara Keith suits up for a game of roller hockey and brings us stories of ordinary people with extraordinary lives. Then we retire to the den for a round of Clue as we explore mysteries and clues.

“Virtual Bruce Lee” Ethan Lindsey:
Tom Craven is a 28-year-old video game tester from LA. He spends his office hours plugged into video games finding bugs and errors. Then he leaves work, drives home, goes into his room and plugs himself right back in. And in that world, Tom is a superstar. Click here to learn more about Tom’s online world.

“Burlesque Banker” Charla Bear:
When you first get to know someone, you might only know who she is on the surface. The more you get to know her, the more she exposes what’s underneath. It’s kind of like a personality strip tease. But what if the secret underneath actually IS like stripping? Charla Bear peeks into the life of a corporate working girl and finds a burlesque dancer inside.

“Chief of Staff Turns Hmong Mormon Bishop” Tamara Keith:
Hundreds of people fill state capitols helping lawmakers craft their bills. They work such long hours you might wonder whether they have a life outside the state capitol. Tamara Keith has the story of one chief of staff who has an extraordinarily different life after hours. 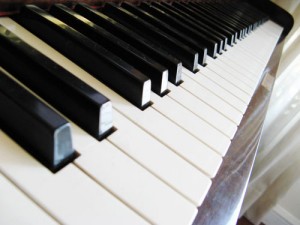 You can pick up clues about people in many different ways. Just as Sherlock Holmes could read into a person’s background by the way they dressed, B-Side contributor John Tynan talked with a man who learns about people through an unlikely source.

“Cell Phone Clues” Rob Sachs:
You hear the Rant all the time…people on cell phones, they are so rude, obnoxious, and inconsiderate to the people around them. B-Sider Rob Sachs adds one adjective you might not have thought of public cell phone users…enigmatic.

“Open Secret” an interview with Steve Lickteig:
Steve Lickteig is a radio producer and occasional documentary filmmaker. He’s currently working on a film called Open Secret, about his own life. Steve was always told he was adopted but as he got older, he learned there was a lot more to the story than that. 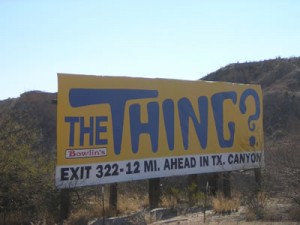 Sometimes clues are as subtle as, I dunno, an elephant, or a ton of bricks. If you’ve ever driven along Interstate 10 between El Paso and Tucson, you’ve probably seen signposts for a roadside attraction called “The Thing.” The billboards advertise a cheap and quirky tourist trap. For the road weary, the signs play hard on the imagination. What could The Thing be? Rene Gutel went to find out.