In zoology, crepuscular refers to animals becoming active at twilight or before sunrise, as do bats and certain insects and birds. On this edition of B-Side Tamara Keith and Rene Gutel explore dusk, with a walk on a busy trail. Stories include a visit to the National Zoo, an exploration of “magic hour,” and a trip to the top of the empire state building with the man who lights it up.

“Magic Hour” Learka Bosnak:
It is approaching the magic hour before dusk when all things are related. Walter Anderson said that. He was a southern artist. Photographers know what he was talking about. And so do the people who make movies. They say the light in the sky at this time of day is both unique and necessary to doing their work. Learka Bosnak reports. 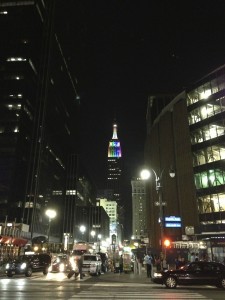 Around dusk most nights, New York’s tallest skyscraper – the Empire State Building – turns colors. Some nights it’s red, white and blue. Other nights it blushes pink. As you might guess, it’s no small feat to light up a 100-story building. The thing is 200 times as tall as your average Christmas tree. Dave Johns met the man who runs the wires behind New York City’s Tower Lights.