On this edition of B-Side, Tamara Keith and Charla Bear get lost on purpose.  They are dropped off in a mysterious suburban location and have to find their way back to downtown Washington, DC.  Think of it as a low budget version of one of those survival shows on the Discovery Channel.  The show is all about losing things from a diary to a stream.  Enjoy!

Lost Streams: Kristin Espeland
Some things seem easy to lose.  But a stream?  Reporter Kristin Espeland has this story from Appalachia, where residents have seen hundreds of miles of streams disappear under piles of coal mining waste.

Hearing Loss: Judah Leblang
Judah had a life-long connection to the deaf.  Then he lost most of the hearing in his left ear. 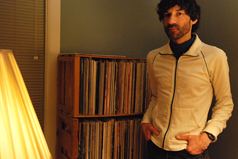 Some things get lost and you barely miss them. But when music reviewer Dave Segal lost a huge chunk of his record collection, he lost part of himself.  Dave wrote about his ordeal here if you’d like to read more.

Dear Diary, Where Are You?: Anna Sachs
A lot of girls when they reach a certain age start keeping a journal, a diary. Anna Sachs had a diary when she was younger and she spoke to Tamara about how she discovered she had lost it.