In November of 2003, Arnold Schwarzenegger became the 38th Governor of California and B-Side aired this show about the weird world of politics. These are stories you won’t pick up watching Washington Week in Review. Hosted by Mia Lobel.

Simon’s: Jeff Chorney
Jeff paid a visit to find out why this dimly lit Chinese restaurant and bar is where California’s political machine goes for lubrication.

9-11 Conspiracy: Dave Gilson and Ben Temchine
A small movement of Americans are convinced that the government itself was responsible for the biggest atrocity in US history. 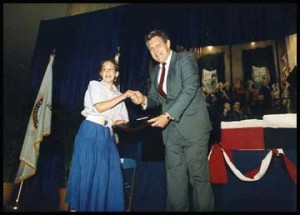 B-side host Mia Lobel gets an early introduction to politics in 1986 after winning a “What the Constitution Means to Me” national essay contest. She is seen here with Reagan’s Secretary of Education, William Bennett.